/ PPP in the News / 2012 YEARENDER: Roads, airports, and the long wait for PPPs
home|contact us|search page|Skip to Main Content|accessibility page

2012 YEARENDER: Roads, airports, and the long wait for PPPs

MANILA, Philippines – If there’s one thing Filipinos will remember about 2012, apart from the exceptionally high economic growth, it has got to be the bad traffic caused by so many infrastructure projects the government and private sector have been undertaking.

This is true because by now, Filipinos, especially those in Metro Manila, have learned to get used to the sound of excavations, masons dumping cement to be mixed manually, and the honking of horns while passing by a road construction project. It’s the new beat in the streets.

These are also accompanied by construction site scenes that have shown many Filipinos what the government is willing to risk just to work double time and catch up with its Asian neighbors. For many years, the Philippines has lagged behind in terms of investments and infrastructure, stifling the economy and overall development in the process.

But, somehow, in 2012, the government was able to make strides, at least in its infrastructure commitments. The private sector took the cue and private property development projects soared 18% in the 3rd quarter.

The only question now is whether these are enough to attain and sustain the growth the country needs to lick poverty.

In 2010, the Aquino government has set infrastructure investments, particularly via capital intensive roads, airports and bridges projects under the pubic-private partnership (PPP) scheme, as its anchor for its economic growth strategy.

While the promised projects stalled in 2011, infrastructure spending by the government and private sector took off in 2012.

Public construction grew 23.7% in the 3rd quarter, reversing its 19% drop in 2011, while private construction expanded 25%, also reversing its 5.9% decline in 2011. Most of the government projects involved roads and irrigation outside the PPP scheme and in areas outside of Metro Manila, Economic Planning Secretary Arsenio Balisacan said.

While the delays in big-ticket and high-profile projects under the PPP scheme were attributed mainly to governance checks and procurement process reforms, in 2012, Department of Public Works and Highways (DPWH) Secretary Rogelio Singson said these translated to infrastructure projects that now cost 15% to 20% cheaper and about P10 billion savings for the government.

This was no small feat. Infrastructure spending in 3rd quarter 2012 was a major contributor to the phenomenal 7.1% economic growth, a turnaround from the dismal 3.9% growth the economy posted in 2011, partly due to government’s underspending.

The DPWH is also promising to make a bigger splash next as its budget hits P152.4 billion in 2013. The DPWH is one of the biggest gainers in terms of allocation from the government’s P2.006 trillion budget in 2013.

“You have not seen them yet, our budget for projects is going to double for 2013 so please accept that there will be some inconvenience as we fix up the roads,” Singson noted.

Contrary to the better-than-expected performance of the DPWH, the airports projects under the PPP initiative were in the doldrums.

Expanding air access to destinations outside Metro Manila, which host the congested Ninoy Aquino International Airport (NAIA), was meant to support the government’s goal of doubling tourist arrivals to 6 million by 2016.

The NAIA complex, still the main gateway to the country, is located in the middle of the city and has little room to expand, stifling the aggressive expansion of air traffic as tourists, businessmen, overseas Filipino workers snap promotional fares of budget airlines. NAIA Terminal 1 remains under renovation after foreign travelers voted it as one of the world’s worst.

The airports are under Department of Transportation and Communication (DOTC), which has gone through leadership changes in recent years. The strategy for airports under the PPP scheme also changed after extended review of the project designs under previous Transportation Secretary Mar Roxas.

From being a pure private investment to a hybrid one, some provincial airport projects in the offing would be funded by multilateral agencies and taxpayers would shoulder the costs later.

The PPP strategy, however, remained alive in 2012. While impatient few have, at some point, changed the meaning of PPPs to Powerpoint Presentation, reminiscent of how the first 10 projects were launched, in the remaining days of 2012, it got back its name. 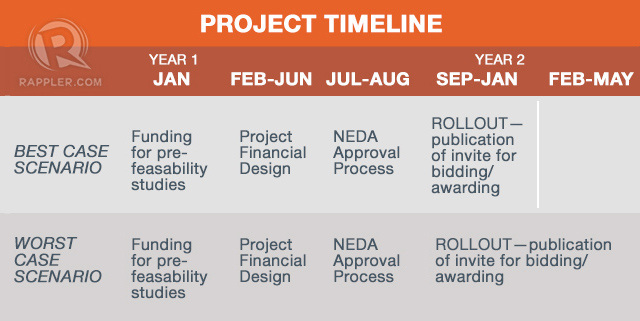 The PPP Center announced it has ‘rolled out’ all the 8 projects it promised at the start of the year. The list has evolved to include not just roads, bridges, and airports, but also schools, hospitals and more.

This is the first time the government was able to meet any goal since 2010. This brings the total number of rolled out projects to 9, after more than 2 years of the President’s PPP Initiative. This is still one short from the 10 that was initially launched as ‘ready for rollout’ more than 2 years ago.

PPP Center Executive Director Cosette Canilao said this has given them confidence that around 6 PPP projects will commence construction by 2013.

The PPP Center knows rolling out these projects is only the start of a longer process of bidding and due diligence that interested firms need to undertake. For them, rollout means being able to publish the invitation to prequalify to bid (ITPB).

The ITPB contains pertinent project information that interested firms can use to start undertaking due diligence. These information includes the total project cost and the terms whether its a Build-Operate-Transfer (BOT) or Build-Lease-Transfer (BLT) or a similar form of undertaking.

The published document also contains the persons in charge of the project bidding and their contact numbers as well as the project scope which sets the deliverables for the project.

On the average, Canilao said it takes at least 18 months for the actual construction of a PPP project to begin. The stages that take the most time are feasibility studies which take 4 to 5 months, a process that cannot be shortened to prevent sacrificing a project’s quality and effectivity, and due diligence that lasts 5 to 6 months.

To finance its public infrastructure projects, the government allotted P182.2 billion of its P1.8 trillion-worth national budget for 2012. To sustain growth, this budget is being increased to more than double the amount – P400 billion – in 2013.

However, economist and former Budget Secretary Benjamin Diokno in his column in BusinessWorld said while the government’s infrastructure spending in the first 10 months of 2012 was at P165.7 billion, actual spending was lower.

After 10 months, Diokno noted that the government’s spending was only 55.6% of the its P297.98 billion-worth target for the year. With only two month’s worth of actual spending left unbooked, Diokno believes actual spending is not going to catch up.

“The end-October level, however, was still 65% higher than the rock-bottom P100.4 billion recorded in the same period a year ago. Overall, that’s unspectacular performance,” Diokno said.

“Moving forward but not catching up Philippine authorities should not rest of the laurels of the 7.1% GDP growth in the third quarter. It’s too early for a celebration. There’s still an enormous task of catching up to do. Much needs to be done,” he added.

In so far as PPP funding is concerned, the PPP Center assured that its funds are intact and sufficient for whatever needs to be done. The delay in the ‘rollout’ of the PPPs did not stop donor agencies and even the private sector from putting up funds to help the Philippine government move things along.

The partnership of the Asian Development Bank (ADB) with the Australian and Canadian governments gave the PPP Center’s Project Development Monitoring Fund (PDMF) an addition of $18 million-worth of funding to finance pre-feasibility studies of agencies that do not have enough funds to undertake their own.

This came just in time before the PDMF dried up June. Canilao earlier said the PDMF is expected to dry up by mid-2012, making it difficult to finance the pre-feasibility studies of other PPPs coming into the rollout phase.

The changes and the noises we have experienced and heard this 2012 due to these infrastructure projects are more than welcome, especially if it means more jobs and better futures for millions of Filipinos.

But as long as actual spending remains low and it takes too long to get projects on the ground, development and economic growth may not be as forthcoming as they seemed. – Rappler.com